Briefly, if you look at a large moving scene for a while, you will experience things moving in the opposite direction afterwards. This “motion aftereffect” was already known to Aristotle, presumably from the visual inspection of waterfalls. It was rediscovered by Purkinje in the 19th century, on the occasion of witnessing a cavalry parade. Now, we were able to show that listening to ascending or descending musical scales produces a visual aftereffect in the expected (opposite) direction. 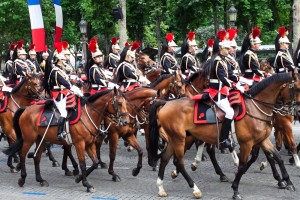 A cavalry parade, much like the one that inspired Purkinje and launched a thousand papers.

I anticipate to get a lot of grief for this, but I consider the study to be executed in a valid and rigorous way and it contributes to the often neglected study of multimodal effects. Let alone multimodal higher-order effects. But they do exist.

What is a motion aftereffect (MOA)? Have a look here or below.

To see a motion aftereffect, look at the red dot (Warning: Browser-dependent, the effect might be a little subtle if the animation renders in a choppy fashion.)

Here are two figures that didn’t make it into the paper. Consider them as supplementary material. For an explanation of what the axes mean, etc. – see the paper itself. It won’t make much sense to go into that here without the context of the experimental setup. 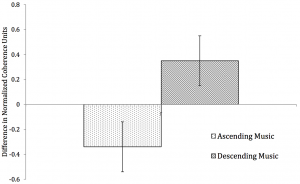 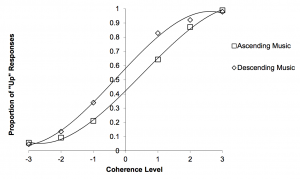