Retro-viral phenomena: The dress over and over again

It is happening again. Another “dress”-like image just surfaced. 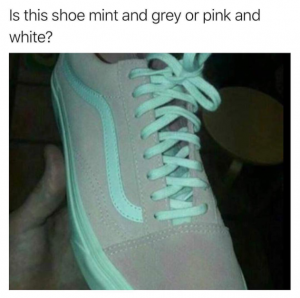 As far as I can tell, more or less the same thing is going on. Ill defined lighting conditions in the images are being filled in by lighting assumptions, and they differ between people due to a variety of factors, including which light they have seen more of. Just as described in my original paper.

As we get better at constructing these (images with ill-defined illumination), I expect more of these to pop up periodically. But people now seem more comfortable (and less surprised) by the notion that we can see colors of the same image differently.

The reason these things are still a thing is our tacit assumption that we all more or less see the same reality as everyone else.

So if I’m right (which most people presume) and someone else disagrees, they have to be wrong, for whatever reason. Color stimuli like this seem to produce categorically and profoundly differing interpretations. Which is what makes them so unsettling.

I think the same thing – more or less – applies to social and political questions. We take our experience at face value and fill the rest in with assumptions that are based on prior experience. As people’s experiences will differ, disagreements abound.

Hopefully, as these become more common, it will make people more comfortable with the notion that they can fundamentally – but sincerely – disagree with their fellow man.

Because people operate experientially. Here, they experience benign disagreement. In contrast to politics, where the disagreement is often no longer benign.

So this kind of thing could be therapeutic.

We could use it.

This entry was posted in Philosophy, Psychology, Science, Social commentary. Bookmark the permalink.