On dialogues between Neuroscience and Society

What do Frank Gehry, Jeff Hawkins and the Dalai Lama have in common? 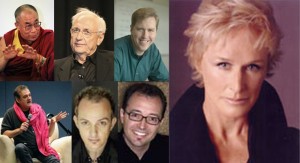 The SfN "Dialogues between Neuroscience and Society" lecture speakers 2005-2010

They were all previous speakers for the “Dialogues between Neuroscience and Society” SFN lecture series.

The series was introduced in 2005, and has featured one such lecture every year since. Keep in mind that SfN is an evolving (adaptive?) entity. For instance, minisymposia were introduced as late as 2004. The current form of the meeting is a very recent creation, liable to change again.

This lecture series has not been entirely without controversy. The first such lecture – by the Dalai Lama in 2005 – triggered a serious row, including a threatened meeting boycott by some scientists, an online petition (which is still online), as well as editorials in Nature, the New York Times, and many, many others. The sentiment of the critics was that SfN should not give a forum to a non-scientist theocratic dictator to spew his superstitious venom. Despite all these preliminary excitement, the actual meeting, including the inaugural “dialogues” lecture by his holiness went off without a hitch, and most 2005 attendees agree that the Dalai was positively lovely in his presentation.

More recent choices by the society have been “safer”, and without any notable controversy. An alternative explanation for this calm is that scientists might perhaps have gotten used to the notion that non-scientists are allowed to speak at SfN.

In any case, one of the appealing features of the “Dialogues between Neuroscience and Society lecture” is that it starts the meeting off with a bang. It typically starts at noon on Saturday, to be followed by the first content session at 1 pm. This year’s speaker is Glenn Close, who is slated to speak on the issue of mental health and the importance of continued research on the underlying basis of mental illness.

The introduction of this lecture series is actually quite ingenious, as is lends some much needed glamor to the meeting, spiking public curiosity (and media attention) in what would otherwise “just” be the annual gathering of many a bench scientist (aka the common “lab rat”).

More importantly, it does highlight a serious issue in contemporary science (and society). Currently, a genuine dialogue between science and society is both direly needed and in short supply. We all know about Snow’s division between the sciences and the humanities, with all its undesirable consequences (for a reminder, see here). Sadly, this division has been joined by a gap of even greater magnitude, namely that between Science and Society itself. The details of this matter will have to remain the subject of a future post, but let me be clear that I think that this chasm is enormous and currently only bridged by extremely narrow, fragile and – at best – noisy channels. Misunderstandings between Science and Society abound. This is quite tragic, as (basic) science is ultimately funded by society. Conversely, almost every way in which our everyday life differs from that in the 16th century (or for that matter, ANY century), is owed to science in one way or the other (simplifying the complex relationship between science and technology for the sake of argument). In other words, this relationship is crucial. Ideally, it would be characterized by a symbiotic, mutually beneficial exchange (progress for money). Recently, this relationship has been gummed up by all kinds of ideological trench warfare, ranging from animal rights terrorism to evolution/creationism “debates” to the arguments over anthropogenic climate change. 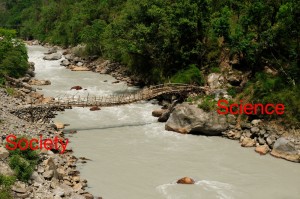 The current relationship between science and society?

As tempting as the assertion might be, the point is not that the scientists are always right, whereas the ignorant society is always wrong and that the enlightened scientists just need to educate the witless and benighted public. No – the point is that dialogue is crucial. Dialogue that is characterized by mutual respect and an understanding that the common greater good is in jeopardy if a spirit of benevolence does not prevail.

In this sense, while the “dialogues” lecture series is certainly not sufficient, it is a necessary start. An involvement of high profile figures in the public awareness is perhaps a good way to clear the path for a much wider dialogue. For this, the Society should be commended.

This entry was posted in Conference. Bookmark the permalink.

2 Responses to On dialogues between Neuroscience and Society