At the SfN meeting (as at most conferences), posters are much more abundant than talks, by about an order magnitude. This – together with the fact that one is not always granted the privilege of giving a talk, while one can usually get a poster presentation – led to the notion that talk presentations are somehow more prestigious and have a higher impact than posters. 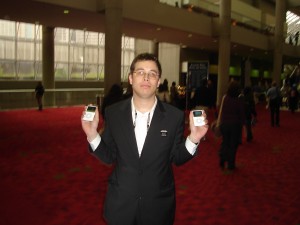 There is no question that they are certainly more convenient, both for the audience as well as for the presenter. Sure, the presenter will typically be sweating bullets during his 15 minutes of fame (and perhaps shortly before then), but afterwards he will be done. This experience contrasts sharply with that of presenting a poster at SfN. Sessions last for 4 hours, and while one is technically not required to present for more than an hour of this time, presenting for the entire time is in fact a strong cultural norm among the SfN crowd. In other words, if you present a popular poster with a high turnout you will not only be extremely hoarse at the end of the session… you will also sound like a broken record throughout (giving the same spiel over and over and over again).

While there is no question that posters are more taxing (for the presenter), they do have an enormous advantage: They are interactive. The semi-private nature of a poster presentation allows the presenter to fine-tune his presentation to the audience, particularly their background and interests. In turn, the attendee can also influence the presentation – mostly by asking follow-up questions – but also by the amount of time he is willing to spend at the poster. In other words, posters are adaptive. This is decidedly different from giving a talk, which has all the charm of a ballistic missile. The short Q&A session at the end of each talk typically allows for very little audience-presenter interaction. The presenter is lucky if he gets one or two questions from the audience (he might even only get a moderator question, if the audience fails to come up with one).

Regarding the higher impact of talks: There might actually be something to that, but mostly as a result of a self-fulfilling prophecy. Due to the notion that talks *are* more prestigious and more highly vetted, they might attract more silverbacks than the average poster (as well as a larger audience in general).

To make a long story short, I have given (more than?) my fair share of talks, but I typically get more out of posters (both as a presenter and as an attendee). However, talks do have one very appealing advantage. In the age of Powerpoint and Keynote, they allow the presentation of slick animations as well as movies of all sorts. In some fields, this handicaps a poster presentations substantially. For instance, visual neuroscientists are in the habit of using ever more complex visual stimuli. If the attendee is not intimately familiar with these setups, they usually will not be able to imagine them from a picture alone (“…now image these wedges rotating in front of the low spatial frequency image at high contrast…”). At this point, a video is more instructive than a great many words.

Efforts to remedy this problem at a poster session are often awkward. For instance, one can bring one’s laptop, but the battery life is typically short, one doesn’t have one’s hand’s free any more and most attendees at a crowded poster won’t be able to see it. Also, Laptops are typically too heavy to be mounted directly on the poster board (as a dynamic figure). Awkward and definitely suboptimal.

To remedy this state of affairs and combine the best of both worlds (the interactive and adaptive nature of the poster and the slick visuals of talks), I introduced the concept of the “Podster” 4 years ago, at SfN 2006 in Atlanta. This was the first year that video iPods made the concept feasible.

How times have changed… this years release of the iPad changes everything, again. In other words, the Podster concept needs to be updated. Instead of mounting a video iPod on the poster, I strongly recommend to mount an iPad. Hence, “Padster”. 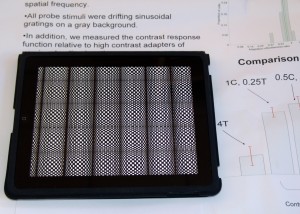 All the advantages of the Podster concept still apply, but even more strongly. For instance, one can take a video of how the data were collected, bring the poster audience “right in the lab” (so to speak), bring science alive and even allow the audience to explore these things interactively (if the videos are arranged in a meaningful way on the iPad).

Of course, mounting an iPad makes it even more important to present and stay with the poster for the entire 4 hour period…

The rapid progress from Podster to Padster in four short years suggests that this might perhaps be the quaintest of all posts. Extrapolating not even that far into the future, the logical conclusion of this development is the disappearance of printed posters altogether. In my estimation, most conferences will adopt video-walls (instead of poster boards) to which one will be able to download – or even stream – one’s “poster” in the near future. In this sense, both Podster and Padster are to be understood as bridge technologies.

Anyway. I’m looking forward to perhaps seeing some Padsters at SfN this year. I will be sure to bring mine.

This entry was posted in Conference. Bookmark the permalink.